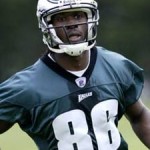 The Philadelphia Eagles were hoping to put the memory of Terrell Owens behind them with the ascension of Reggie Brown to the number one wide receiver slot. Things were progressing well with pundits calling for Brown to have a breakout year. A Washington Post article even commented, “For now, it seems Brown will be given the biggest chance to emerge as a lead wideout.” All the plans came to a grinding halt when Reggie Brown injured his hamstring during practice July 29, 2006.

Brown’s injury doesn’t sound too devastating as he was able to limp off the field and go to the locker room. The Eagles aren’t commenting about the hamstring injury, but all one has to do is look back at Isaac Bruce and his experience with hamstrings to know that things can go downhill quickly.

What should you do if you suspect you have a hamstring injury? The first thing you need to do is stop doing whatever you’re doing. Many athletes think they should try to “ride it out” or “work through the pain.” Your hamstring is the junction of your leg, so it’s important not to do further damage.

What are the stages of hamstring injuries? The first stage is a strain or pulled hamstring. There will be small muscle tears with some pain that leads to loss of function. The second stage is more tearing that leads to discoloration of the area and an increase in pain. The third stage of a hamstring injury is a complete tear, which is very rare. You will be able to feel the hamstring tear with your hand and there will be massive pain.

How long does it take to recover from a hamstring injury? It depends. I know that’s the worst thing you can tell an athlete, but it depends on the severity of injury, the age of the athlete and the sport that is played. Rest, time and stretching are the only things that will make a hamstring injury disappear.

A pulled hamstring is a chronic condition, which means if it happens once the chances are greater it will happen again. You can prevent future occurrences by stretching and weight lifting.